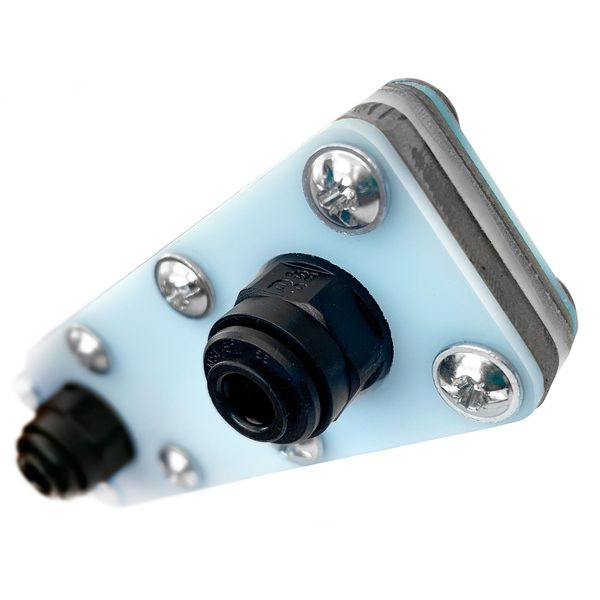 Increasing requirements regarding the quality of ultra-pure waters (e.g. for the needs of pharmacy, biotechnology) force a constant need to increase the degree of monitoring and supervision of the process of producing water of such high quality. The parameters whose supervision is increasingly required are conductivity and the content of organic carbon (TOC – Total Organic Carbon).

The Hydrolab company focuses on the preparation of devices equipped with control and measurement panels. These devices are ergonomic, reliable, and also allow the user for convenience and ease of use. In the process of creating new solutions, the company focuses on currently the best and most reliable solutions available on the electronics and automation market. The systems ensure continuous monitoring of the conductivity and temperature of the produced water. The research and development department conducts intensive work on the measurement of the TOC parameter. In addition, the automation system allows you to control many parameters. These are the operating pressure of the system, the level of filling tanks, automatic volumetric dosing of water and many others.

In practice, the most popular unit of specific electrical conductivity is [μS/cm] or the corresponding unit of specific electrical resistance [MΩ · cm]. Electrical conductivity is a measure of the concentration of ionizing solutes in the sample. During the conductivity measurements an important factor is the cell constant (expressed in [m-1]) used for the measurements, which depends on the geometrical dimensions of this cell. In general, it can be assumed that the cell constant K is given by the formula:

Electrical conductivity is a measure of the current conducted by the ions present in water. It depends on the concentration and nature of the ions as well as the temperature and viscosity of the solution. Pure water has a specific electrical conductivity of 0.05483 μS / cm at 25°C as a result of self-dissociation. The PN-EN 27888 standard specifies in detail the method of preparation of standard solutions with known conductivities at 25°C. Standard solutions can be used during testing, calibration and calibration of conductivity measuring equipment.

When measuring the electrical conductivity of water, one of two types of instruments can be used. The first type is a device equipped with a dip or flow conductivity cell with two or more electrodes. The second type is a device with induction electrodes. Hydrolab’s products focused mainly on measurements using proprietary constructions of conductometers with a two-electrode flow cell. Flow vessels are recommended for measurements of conductivity less than 100 μS / cm. They are used when measuring ultra-pure water. Air is removed in the flow vessels, which may negatively affect the measurement result of the low conductivity value. According to the PN-EN 27888 standard, for given conductivity measuring ranges, the values ​​of the cell constant value are recommended. It is assumed that the higher the conductivity, the greater the value of the cell constant. When measuring ultra-pure water, vessels with a constant 0.1 or 0.01 are usually used. Hydrolab conductivity meters are equipped with a control system taking into account the constant cell.


Increasing requirements regarding the quality of ultra-pure waters (e.g. for the needs of pharmacy, biotechnology) force a constant need to increase the degree of monitoring and supervision of the process of producing water of such high quality. One of the parameters whose supervision is increasingly required is the content of organic carbon (TOC – Total Organic Carbon). The organic carbon TOC content is determined from the difference of the total carbon TC content and the inorganic TIC carbon content, according to the following formula:

There are a number of measuring devices and TOC analyzers that allow for detailed and extremely precise determination of the TOC parameter value. Unfortunately, these instruments are very complicated and their price is very high. In addition, an important disadvantage of the commonly available equipment is mostly the need for off-line operation, i.e. introducing the tested sample into the measuring chamber and subjecting it to analysis. However, in the process of purifying and preparing ultra-pure water, it is important to monitor the parameters of the obtained product on-line, so that you can immediately react to changes (deterioration) in quality and introduce modifications (e.g. replacement of filter elements).

Hydrolab’s research and development department conducts intensive works aimed at developing methods for measuring the TOC parameter. Our priority is to make the measurement possible on-line (in flowing water).

The second important aspect is the miniaturization and reduction of the analyzer production costs. This improvement will allow the analyzer to be embedded as part of the ultra-pure water production line. Developed analyzers belong to technologically advanced high-tech class devices, based on knowledge, which have no counterparts on the global market. Their characteristic features are: miniaturization, energy-saving power supply, low costs and adaptation to continuous (including telemetry) monitoring.